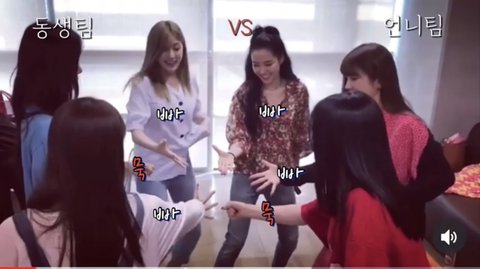 What bullshit is that?

Apink playing around in the waiting room.

Son Naeun was so active in the waiting room she even came up with a choreo herself.

The happy side of her that we only get to see when she’s with Apink.

Namjoo was laughing so Son Naeun followed her.

Naeun: I’ll be back

Son Naeun was crying and Park Chorong ran to her in 1 sec to comfort her.

And I saw a post just now – During Yoon Bomi’s YouTube live broadcast, she mentioned that not long ago the members including Son Naeun gathered in Bomi’s new house and had fun together. No matter what the situation is like right now, it’s just not true that they’re not on good terms.

1. [+47][-2] Agreed. The rumour about their bad relationship is really not true. And people suddenly started talking about that after only 2 weeks?

3. [+42][-2] If you start watching this video from 13:52, Bomi said: different from what Naeun seems like on the surface, she’s really talkative when she’s with the Apink members only.

4. [+19][-0] There’s really no discord between Naeun and the members. When she was promoting as Apink, she was more sincere than anyone else.

5. [+17][-0] This is right. Even people who are not their fans know that the members have a good relationship with each other.

Apink Who Held A Fan Meeting With Legendary Visuals