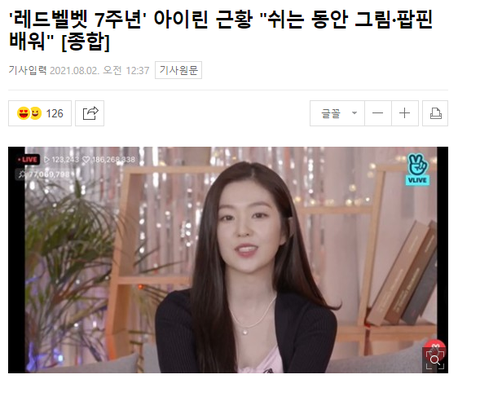 She basically went on a vacation.

1. [+739][-343] No but what do you expect? Does she have to say that she was in a corner of her room contemplating why she had done that all day long…? keke So do you people reflect on yourselves after writing malicious comments? Killing people with your evil words but still not reflecting on yourselves, continuing to write malicious comments keke You guys would be in jail instead of being told to just self-reflect if we tried to list out every malicious comment you’ve written kekeke

2. [+567][-125] She’s not showing off that she’s been doing lots of fun stuff, it was a corner of the live where they were talking about what each member has been up to (Joy and Wendy with their solo promotions, Seulgi hosting her show Seulgi.zip, Wendy becoming a radio DJ, Yeri filming a web drama) and Joy naturally looked at Irene and asked ‘what have you been doing, unnie?’ (due to the controversy, Irene was self-reflecting, hence she did not have any solo activities). There was a moment of silence in the room and it was starting to feel weird that’s why she immediately talked about learning drawing and dancing, and talking about what other stuff she’s been up to.

6. [+152][-15] But, did self-reflect mean being stuck in the house? Also, when Irene said that, she didn’t say it joyfully in the sense that she enjoyed it, other members were joining in and even trying harder than Irene to say that ‘unnie learned these things too right’.

8. [+100][-23] Among all idols who have done stupid shit and gotten into trouble, Irene self-reflected for the longest time and she appears to be the most sincere. Some of them, their agency’s trying to shut people’s mouths, and some of them are making a comeback with face as thick as steel, why can’t Irene appear then? And also, it was a situation where she had no choice but to say that, do you expect her to say in front of the members ‘I was focused on self-reflecting’? Don’t you guys think that’s too much? Enough is enough, if you’re gonna continue being like this, it’s no different from admitting it’s due to your inferiority complex.

9. [+100][-12] So did you think Irene would be stuck in her room reflecting on herself with her knees on the floor?? I’m not a fan, but it’s my first time seeing people hate for no reason like this so I was shocked kekeke