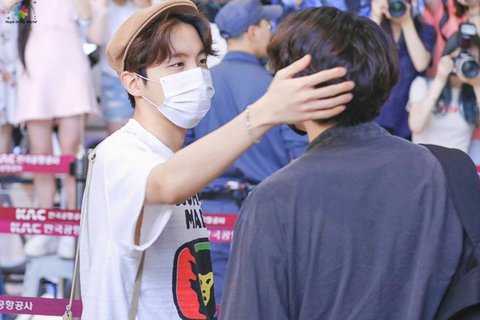 Fxxk, that’s why my fave in BTS is Jung Hoseok. Jungkookie’s V LIVE was dope too.

Do you have a hyung who buys many slices of cakes to make a whole cake for you when all the birthday cake stores are closed? I don’t but Jungkookie does. He’s called Jung Hoseok-hyung…

4. [+45][-0] He’s never done any stupid shit, he knows what he should say and what he shouldn’t, he’s a good idol and even his personality is amazing kekekeke Well, even if his face is not my type, he dances fxxking well, he’s good at singing and composing too, and he takes good care of BTS too ㅠㅠ Gotta give a shoutout to my bias.

6. [+26][-0] Not gonna lie, when Hobi came I thought 3 members were coming kekekekekekekekeke Hobi was so hyper, daebak kekekekekekekeke It was so noisy so I was like why are the rest not coming in? But turns out it was just him kekekekekekeke Although he wanted to say HBD to him at 12 AM but he knew he had a cake prepared so he came in again with his cake later on, that was so touching too ㅠㅠㅠㅠ

9. [+17][-0] Hoseok ah, the people in charge of commercial photoshoots contacted and said you left your wings there and they told you to quickly go get them before anyone sees them.

10. [+14][-0] I had a lump in my throat when J-Hope came and he heightened the mood and congratulated him so brightly.