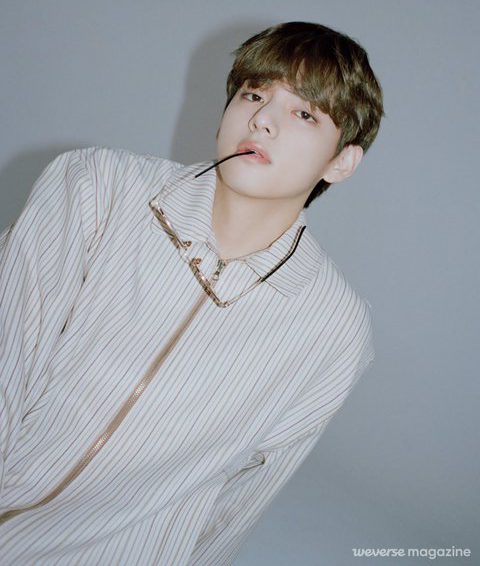 Don’t you feel like that’s an emotion you want to express to people, as an artist? Like you don’t have to explain your messages in detail? (Context: Earlier on, V was talking about how he really likes the emotion an Arctic Monkey song evokes in him even though he doesn’t know what the lyrics are).

V: I don’t know. I just want to exchange the good, and be the one to embrace the bad. So I have a desire to perfect one cool thing about myself.

So how close do you think you are right now to becoming an artist who has perfected something cool?

You’ve been talking about ARMY nonstop for a few minutes. I was going to ask you how you feel about ARMY, but I think you already answered the question. (laughs)

V: They’re just, well, friends I would hate to lose. Friends who seriously give me strength whenever they’re around. Sometimes you find friends like that in life. It’s like that with the other members, and I have other friends who I can share my feelings with. And I have ARMY. So I can’t help but do whatever I can do to make those people smile and make them feel happy.

1. [+119][-2] Add this too. He was doing the interview leisurely but when ARMY was mentioned he suddenly started talking nonstopㅠㅠ

You recently held an impromptu event on Weverse for ARMY.

V: I’m sure there’s lots of ARMY out there who are tired of not being able to see us in person. But since the only thing we can do for them is to be on stage and stuff, I was worried that we’re not doing enough for them. And I love being able to talk with ARMY so much that now it’s like a habit that I read their posts. I have a thing today. I have a test today. I’m moving today. Somehow I feel better when I hear their stories. When I end up reading things like about how ARMY are living or what kind of lives ARMY have, I can’t help but write a response, and because of that ARMY respond, so I try to become friendlier in a more fun way, too. I want us to be more than the Billboard number one Bangtanies—I want to be ARMY’s partner, their best friend, the friend who’s always by their side when we’re not on stage. It feels like business when I talk about communicating with ARMY. (laughs) I just want to talk with a close friend. I wanna talk with a close friend—that’s exactly how I feel. It’s been a long time since I could see my friend, ARMY. Usually when friends can’t see each other they keep in touch all the time. I can talk about all kinds of things like that with ARMY thanks to the Weverse platform, and because I can hear all about their lives, I think I was able to go on Weverse and hold that kind of event.

You’ve been talking about ARMY nonstop for a few minutes. I was going to ask you how you feel about ARMY, but I think you already answered the question. (laughs)

V: They’re just, well, friends I would hate to lose. Friends who seriously give me strength whenever they’re around. Sometimes you find friends like that in life. It’s like that with the other members, and I have other friends who I can share my feelings with. And I have ARMY. So I can’t help but do whatever I can do to make those people smile and make them feel happy.

2. [+89][-2] How long has it been since he’s gotten such beautiful hair, makeup and outfit fxxk. The interviewㅠㅠwas good tooㅠㅠ Taehyung ah I love youㅠㅠㅠ

4. [+36][-0] I get happy just from seeing Taehyungie’s smiling face kekeke Teddy bear who does nice things to make ARMYs smile.

5. [+29][-0] The interview was really good. He watches videos and studies them for every performance in order to do well, I’m so fxxking attracted to Kim Taehyung.

You said that you got inspiration from artists of the past like Sammy Davis Jr. for your performance in “Dynamite.” Was there any artist who inspired you for “Butter”?

V: Well, there was Billy Joel. When I shoot a music video, I think of a movie more than any one artist. And when I perform on stage, for some songs I think of the way movies like Reservoir Dogs look. For “Butter,” I watched a lot of teen movies. And musicals. After that I randomly ended up seeing a video on YouTube of some scenes from an old teen movie Johnny Depp did [which turned out to be the movie Cry-Baby]. The image I got from that was really intense. That’s the look I used in “Butter.”

“Butter” felt like a teen musical to me and now I know why.

V: I did it like a teen musical, just like you say. When we shot the “Butter” music video, I really, really tried to shoot the part in the elevator so it would feel like a teen movie. Although a lot of takes were edited, so not all of it’s there. (laughs)

Q. Express your heart to protect ARMY through a drawing.

He drew a tetrapod by meaning ‘I want to protect ARMY from all the bad happenings’.

V who was focussed on his drawing while lighting the fabric board with his phone light.

“A Tetrapod plays the role of blocking the waves right. I too want to be the ARMY’s tetrapod. I want to first protect them from all the bad happenings pouring onto them, and I will not just protect them but I want to be an existence that will absorb all the bad things and turn them into good things. I drew this to contain that kind of meaning.”

Netizens Marvel At BTS ‘Butter’ being No.1 Again