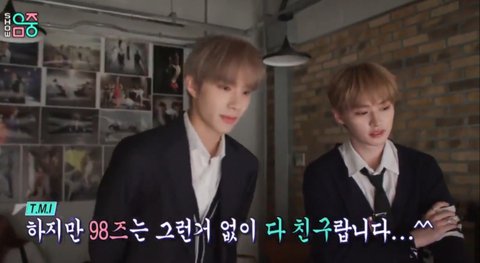 They were from the same school. Jungwoo was in the same grade as the ‘97 liners and Lee Know was with the ‘98 liners. That day was the first time they met keke

[Drop the formalities and talk comfortably!]

In the end the 2 of them became friends kekekeke

It’s complicated between the ‘98 liners, but did he just ask if he’s friends with Seungkwan? kekekekekekekeke

1. [+235][-2] I think this was fxxking funny too. They had to do rock paper scissors but all 3 of them were nervous and they were so hesitant when they counted 1 2 3….!! Bullshit lmaooooooooooo

3. [+150][-3] Seungkwan’s friends: Vernon, Moonbin, Juyeon, Lee Know, Jungwoo, SinB, Umji kekekekekekekekeke He probably has a lot more friends whom we don’t know about if no one has ever seen them together or if he’s never mentioned them kekeke

5. [+76][-1] I… find it so amusing that Jungwoo is talking to other idols behind the scenes… I was screeching while watching kekekeke Our Jungwoo was nervous again, that’s just so cute..

7. [+64][-1] Out of all the Lee Knows I’ve seen recently, this Lee Know is the most obedient cat. It’s so fun, watching Lee Know in an unfamiliar place… Just yesterday he was on Bubble like a k-ex boyfriend.

9. [+52][-1] Is it because of DAY6 Kiss The Radio? If there’s no punishment he thinks it’s boring? It’s funny how Lee Know suggested that the loser should buy coffee next time.

11. [+44][-1] Lee Know is like a gentle cat, when he’s just smiling widely it must be so damn awkward… My wish is for them to quickly grow close and start joking around ㅠ Fxxking handsome fxxking funny combo, that’s definitely possible.