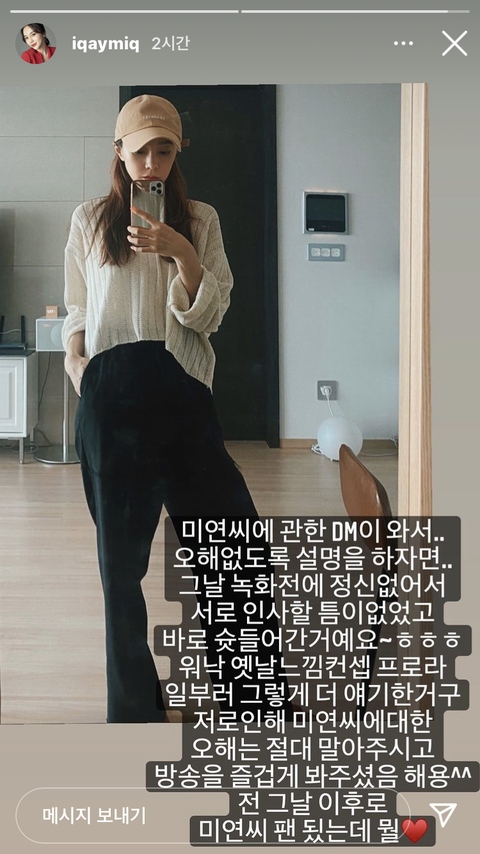 I received a DM regarding Miyeon-ssi..

Before the recording on that day, we were busy, so we didn’t have time to greet each other,

Since the program is based on an old-fashioned concept, I said it that way on purpose.

Please do not misunderstand Miyeon-ssi because of me.

I hope you enjoyed the show^^

After that day, I became a fan of Miyeon-ssi.

People are all crowding and clobbering Miyeon for being rude just because of such a tiny thing.

How would people think of Miyeon’s image if this clarification did not make it onto Talker’s Choice.

And what about Ayumi who got scolded by people because they think she’s suddenly enforcing a military-like hierarchy to her junior when her intention was simply to make a joke that follows the show’s old-fashioned concept.

If I were them, I would really flip out.

For search, so that more people can see this:

2. [+112][-5] Ayumi had a hard time suffering from lots of criticism and hate because people treated ridiculous rumors about her as the truth. Her heart must’ve hurt more seeing the DM about Miyeon. Ayumi is surely not someone who would shame others like that. When people say she was shaming Miyeon on TV, if you watch the show, you’ll know that it’s their first time meeting each other, and they’ve talked about this beforehand. She monitored the show before going for the shooting and she was just trying to appear as an old-fashioned person because that’s the concept of the show. She explained all this, but they just decided to cut the front and back, leaving no context and trying to bury Miyeon no matter what.

3. [+88][-4] She must be really upset.. I’ve been following her since debut, I really hope Miyeon gets over this without getting hurtㅠㅠㅠㅠ

4. [+38][-1] Even though Ayumi didn’t clarify this at first, people were just trying to defame them for no reason..

5. [+35][-1] Miyeon please be happy…. She trained for 6 years and she’s finally starting to rise in her career after debut. During the times when we didn’t hear from the members for a while because of some stupid scandal, she was trying to update the fans through V LIVEs. Please stop hurting her.

6. [+30][-1] She could’ve just let this pass, but I’m really thankful for Ayumi for uploading a post just to clarifyㅠㅠ

7. [+27][-0] If you look at the number of upvotes on this vote you would probably think Miyeon caused social unrest or something. Please stop bullying our Miyeonie, don’t touch her.

+ At first that person was indeed like an old-fashioned person but it’s a fact that Miyeon didn’t greet her.

Ha.. I’m not dissing Miyeon, but it’s a fact that she didn’t greet her sunbae kekeke Who would scold someone on a radio show for not greeting them when a controversy breaks out? Your double standards are crazy seriously keke The sunbae should greet first? Spoiled kids who haven’t lived a social life before? And also I’ve never written any other posts.. Don’t scold any fandoms, I’m not a fan of anyone, I’m just a fan who’s been watching controversies on Pann~ I’m not an NCTzen, stop mentioning fandoms, please talk about the content of this post.. Miyeon went up to Sana first to greet her and ask for her number, so she made it more embarrassing because she didn’t greet her sunbae right? They walked past each other but she didn’t greet her that’s why she said that.

11. [+18][-0] We all know the truth, anyone can tell these people are just defaming them for no good reason. Miyeon and Ayumi, hwaiting to both of you.