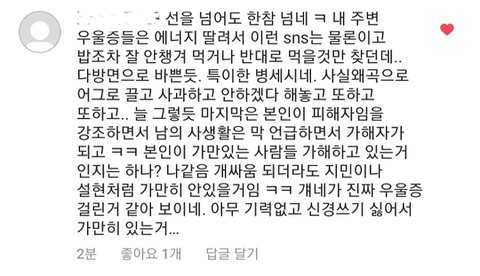 Seriously, Jimin and Seolhyun might get depression.. If it was me getting scolded by this weird kid everyday I wake up in the morning. Jimin left the industry and Seolhyun is self-reflecting, but that weird kid just keeps on posting the same things reminding everyone of it nonstop..

Comment:
It’s been a while since she’s crossed the line ke People with depression around me are full of this kind of energy so they obviously post this kind of stuff on SNS. They either don’t eat properly or they’re on the other extreme, only eating all day long.. they’re busy with all sorts of stuff. It’s an unusual condition. Attracting aggros through distorting the truth, saying she’s not gonna apologise and doing the same thing again and again.. She’s always like that, emphasizing that she’s the victim but she’s turning into the perpetrator cus she’s mentioning other people’s private lives keke Does she know that she’s bullying people who’re just being quiet and not doing anything keke They really look like they got depression. They have no energy at all and they’re just not doing anything about it because they don’t wanna care… ]

1. [+253][-56] Looking at what Kwon Minah is doing now, it reminds me of Goo Hyesun before. Thinking of herself as the victim, from nonsense over-exaggerated delusions and exposing the other person to media brainwashing, I definitely understand why Ahn Jaehyun didn’t respond at that time and why he got depression. I feel bad for AOA members because they’re in the exact same situation right now ㅠㅠ

4. [+64][-0] Yesterday during her live broadcast she said she’s not gonna mention Jimin anymore and she was telling people not to do that anymore too kekekekekekeke Wdym don’t mention her, you’re bringing people to hell one by one with your lies and delusions, do you think you can just get away with it like this?? At least refute against the statement released by the fanclub before you leave~~ When I heard she’s doing a live broadcast again I thought she’s gonna actually talk about how they bullied her, but she still.. only showed signs of her self-harm, cosplaying herself as the victim. Nothing more, nothing less.

5. [+57][-0] I’ve also received counselling in the past because I was treated as a liar due to nonsense said by others. I didn’t have the energy to explain myself and I lost confidence, just thinking if I’m really the person they say I am?.. I was so dejected and I felt wronged. But because I know people who know the truth are on my side, I was able to endure that time. Seolhyun hwaiting, I support you.

6. [+53][-0] I’m actually really worried for Jimin.. There’s no news from her at all and if she tells Kwon Minah to stop Kwon Minah is gonna expose her (secrets) on Instagram immediately. Seems like she can’t do anything at the moment.. Kwon Minah stop, seriously.

7. [+47][-0] I think AOA members got depression for real. During T-ara’s scandal, at least they were busy with activities because the boss of their agency turned to the foreign market, but as we all know FNC is not doing anything. I’m worried if the members got depression, they all seem to be quite weak.

9. [+29][-0] Honestly, the ones who are commenting “I feel sorry for Jimin and Seolhyun”, “Come back” are those who didn’t say a single thing when this scandal broke out last year keke

10. [+23][-0] The public stood by her side for once and she’s all excited now. If it wasn’t for that time, when will she ever receive so much love? Things are even going as she wishes kekekeke She’s also sending Jimin to hell. She must’ve felt so happy?? That’s why she couldn’t stay away from SNS, exposing more and more stuff. She’s asking people to be on her side and doing whatever the hell she wants. She’s crossed the line by too much that’s why she’s getting the opposite effect now ke She must be thinking “this ain’t right”.

11. [+20][-0] The reason why I really agree with this is, she has depression but she’s living so aggressively? I find that strange. My older sister has been through depression. She really turned her back to the world and she would just space out and do nothing. She wouldn’t do or eat anything, and she wouldn’t sleep..