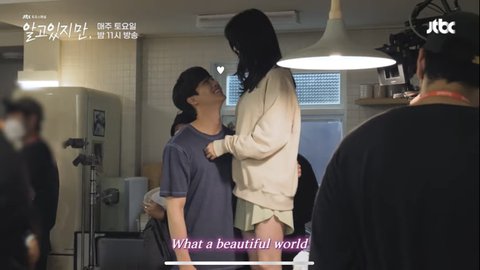 This is the making (behind the scenes) for their drama uploaded just now, and love’s in the air from beginning to end..? kekekekekeke It’s not obvious because Han Sohee’s pretending like it’s not it but if you look at Song Kang it’s obvious.
No but this is just a rehearsal, what’s that facial expression kekekekeke Song Kang’s busy and the viewership rating isn’t that good but there’s a reason why he’s enjoying it kekekeke Don’t know about anything else but their visuals combo is just really..

1. [+392][-11] That feeling when you love your girlfriend to death when you guys are still in your honeymoon period, that feeling is so obvious from Song Kang kekekekekekekeke cute

4. [+255][-7] Feels like Song Kang is making it obvious while Han Sohee is tryna keep it low. Even if they’re not dating, there’s at least something in between.

5. [+255][-6] Although Song Kang also smiles so brightly, it’s really my first time seeing him smiling like that to an acress… Even if I wash my eyes and look out for it, I can’t find that kinda vibe in Song Kang videos on YouTube hahaha Oh yeah thank you~~~!

8. [+189][-34] This is too far into the future but if they get married and give birth to a kid the kid is definitely gonna be insanely good-looking.

9. [+175][-10] Tbh I was like what’s this… kekekekekeke seriously, it’s been so long since there’s a couple whom I wish they’d date, after Hyunbin and Son Yejin. Their visuals combo is so good.