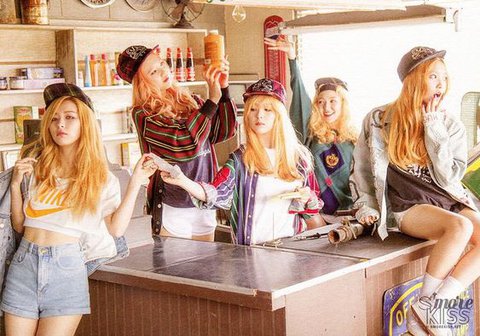 They’re oddly similar, but like a different kind of high-teen

+I’m not saying they’re exactly the same, it’s just like how there are other kinds of high-teen like retro, what I’m trying to say is that they have a unique vibe! No misunderstandings please

2. [+74][-2] Ah, I think I know what you mean. When I look at their group photo, I guess there’s a harmonising fresh vibe? But Red Velvetl had yellow hair and they had more American vibes, whereas NewJeans’ vibe feel like the 90s.

4. [+23][-0] Agreed. During the ‘ICC’ era, they all had blonde hair, but the different chroma really showed legendary detail.. I like the ‘ICC’ and ‘Peekaboo’ MVs the most. Min Heejin’s workㅠ

5. [+19][-1] I think it would’ve been nice if that concept had been maintained… It’s my favorite Red Velvet concept

NewJeans Minji’s Press Pics With Only Base Makeup