Bop to K-pop
Home Knetz Says Netizens Say NCT Jaehyun Is A Good Guy Because Of The Small... 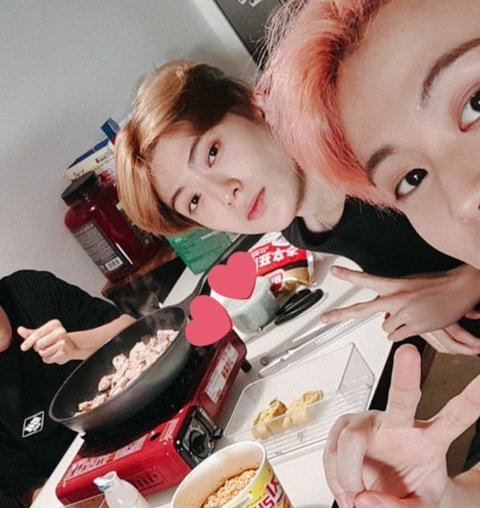 Why NCT Jaehyun Is A Good Man

Jaehyun is sitting in front of the meat and scissors.

Again, Jaehyun is sitting in front of the meat and scissors.

that’s the scissors that’s used to feed you..

(Context: Jaehyun was saying it’s been a long time since he used scissors and Jungwoo said, “no didn’t you use scissors when you cut the bbq pork belly.”)

A person who serves food to others and brings food for others = kind person, agree?

(Monsta X) Minhyuk: Not long ago, Jaehyunie brought walnut cookies to Inkigayo. How can his personality be so good too when he already has a handsome face… And so everyone in Inkigayo enjoyed the cookies.

Jaehyun who prevents you from being hurt.

Jaehyun catching him so that Mark wouldn’t get hurt.

I love this sweet guy.

1. [+257][-5] This was when they were doing their American tour. A puppy he met for the first time peed on him and he never, even for a moment, reacted angrily and just kept petting the puppy and saying, ‘its okay, its okay”. He’s f**king sweet. Johnny also said he has never seen Jaehyun get angry.

(Continue patting the puppy without freaking out)

As you can see, Jaehyun-hyung has very clean and nice skin, but his heart is as pure and nice as his skin. For instance, I’m his roommate and whenever he has to sleep but I’m still doing something, he just goes to sleep without trying to turn off any of the lights. He takes care of me in ways like that.

3. [+113][-1] This too, when Jungwoo just came back from his hiatus, Jaehyun used to put Jungwoo to sleep with his music box when Jungwoo couldn’t sleep.

8. [+55][-1] I didn’t know why my friend kept saying she wanted to marry Jaehyun every day, but knowing now how warm-hearted he is, i wanna marry him too.

I Swear I Had No Interest In NCT In The Past...