Bop to K-pop
Home Female Idols To Antis Who Claimed That aespa’s Giselle & Karina Had An Argument... 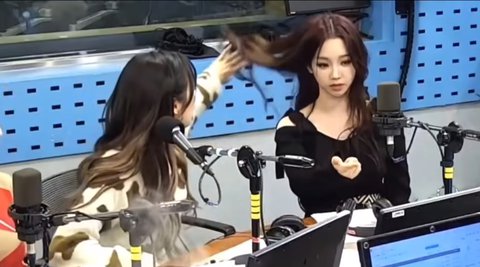 Giselle was fixing Karina’s hair when she suddenly thought of something and started talking to Karina excitedly.

Turns out that people were saying that they were arguing on this day during their vlive (explanation in comments below) and both of them knew about it.

Since then, they started messing around kekekeke

Anyone can tell that the 2 of them are fxxking close to each other. Please stop making assumptions and hating them for no reason.

1. [+242][-9] Ahh cute kekekekeke Seriously, people are talking bullshit about them arguing when they dunno shit,

2. [+155][-9] kekekekeke Ahhh I hope the Pann-nyeo who wrote that sees this. Like why did you even bother to make ridiculous assumptions;;

3. [+66][-0] It’s this kekekekeke Giselle just wanted to look good on camera that’s why she put her hair back in its original position when Karina placed it behind her shoulder. The fact that people think they’re arguing here is just so funny.

4. [+33][-0] Giselle’s hair got caught in the microphone so Karina casually sorted it out but it was on the other side, so Giselle rearranged it. What was there even to fight about?

5. [+24][-0] I fxxking like how fxxking unshakable aespa is keke. They always manage to happily make haters stfu.

6. [+17][-0] aespa prolly search themselves up on the internet a lot. If you look at the way they talk and act, it’s super obvious that they use social media.