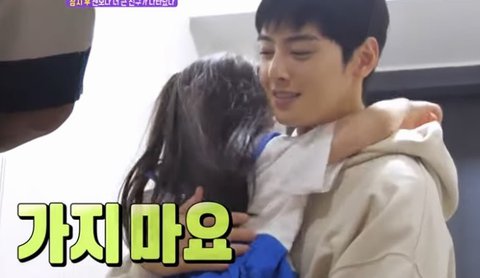 Cha Eunwoo and MJ went on ‘The Return of Superman’.

But after Naeunie saw Cha Eunwoo

She was super shy kekekeke

“Naeunie cannot look at uncle (Cha Eunwoo) in the eyes?”

She was staring at the floor only kekekeke

Naeunie injured her hand while playing.

Should I blow on the wound for you?

Uncle will be hurt too if Naeunie is hurt

Cha Eunwoo became sullen together with Naeunie who is about to cry.

Uncle Eunwoo who carefully puts on a bandage for her

How is it? Is it alright? I didn’t make it too tight right?

Normally she’s ‘NooNaeun’ (older sister Naeun) who takes care of the younger ones and feeds them.

Can you feed me?

But she asked him to feed her.

Can we meet again next time?

In the future, if Naeunie wants me to come, can I come and play with her again?

Naeunie who doesn’t want to part

Naeunie in Cha Eunwoo’s arms, telling him to not leave.

kekekekekeke Her younger brother dragged her down

4. [+52][-0] Kids really can really tell if someone is good-looking. My kid injured their hand and got the wound stitched. We were told to go to the plastic surgery department for disinfection so I booked an appointment and went. The male doctor was super handsome and when he carried out the disinfection, it was supposed to be sting, but my kid was just staring at the doctor’s face;; and didn’t even cry… ㅡ.ㅡ;;; Haha, I-.. The doctor also said ‘good job~’ and smiled bashfully haha My kid was 4yo at that time..

5. [+52][-0] The way Cha Eunwoo was holding her in his arms is fxxking heart-fluttering ㅜㅜㅜ As expected, kids know better when it comes to looks…

9. [+32][-0] I feel bad for Naeunie who showed the real ‘child side’ of her when she asked him to feed her. On one hand, it’s really cute; on the other hand, she must also wanna act like the kid she is but because she’s been taking good care of her younger siblings for quite a long time and people always praise her for that, she’s probably gonna think she needs to do better at taking care of them, and at the same time she’s gonna think she wants to be the younger one too.