Bop to K-pop
Home Female Idols Isn’t This The Most Legendary Dating Rumour???? 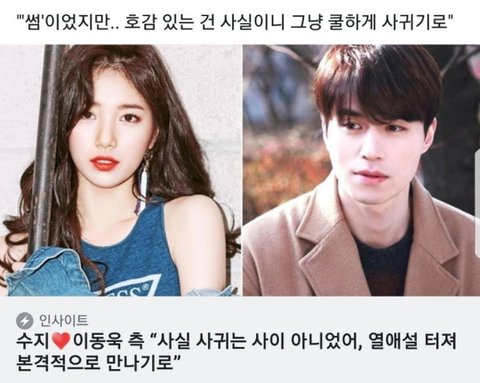 “There was ‘something’ going on in between them but.. since it’s true that they’re interested in each other, they decided to just start dating”

Suzy x Lee Dongwook: “They weren’t really dating, but they decided to officially start dating after the rumour”

What’s this, this is fxxking funny for R E A L.

1. [+747][-3] Taeyang x Min Hyorin: “We cannot get into contact. If the dating news is true, congratulations”. I thought nothing can win this kekeke

2. [+694][-3] When the dating rumour about Swings x Im Bora surfaced as well kekekekekekekekeke They released a statement saying it’s difficult to confirm whether it’s true or not, but the CEO of Swings’s agency is Swings himself, f- kekekekeke

4. [+244][-5] I can imagine Lee Dongwook saying something like this with the tone you hear from his drama, “Since things have already reached this stage, let’s try it – dating.” kekekekekekekekekekekekekeke Obviously it’s gonna be different in reality but.

5. [+211][-2] But Suzy’s taste is fxxking consistent kekekekekeke I think she likes people with big bright eyes.

6. [+142][-2] Did they really date after this? Seems like they announced their break up right after.

9. [+63][-1] Now that I think about it, Suzy seems to have really good taste keke She’s never dated anyone who isn’t a tall and handsome actor kekeke

11. [+41][-2] I got excited for no reason at that time kekekekeke It was heart-fluttering already because of Suzy and Lee Dongwook’s visuals, but it was more heart-fluttering how they weren’t originally dating but decided to just start dating after the rumour….