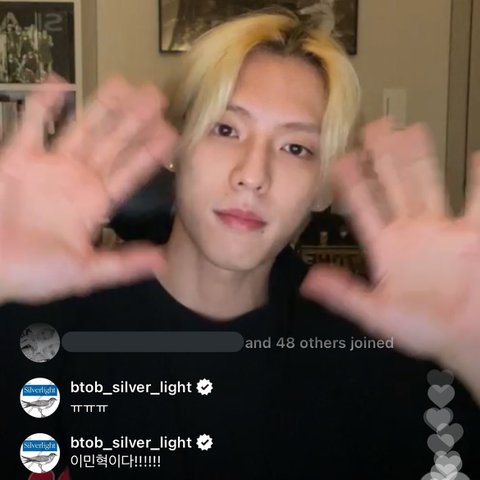 He’s only in his early 30s and he’s muscular because he’s always been working out, but after catching COVID, he lost so much weight, going from 62kg to less than 58kg.. A 2-week recovery is considered to be quick, but he looks so thin.. Let’s really be careful of COVID.. Even if BTOB takes it slow it’s alright.. ㅠㅠ

2. [+57][-4] Yea that’s right.. Minhyuk has always worked out very hard, his body fat percentage is super low and he has lots of muscles, but he still suffered a lot ㅜㅜ He felt so sick in the first 8 days that he couldn’t even use his phone, and apparently his body temperature went up to 39-40 degrees ㅜㅜㅜ Everyone please be careful❤️But I’m really glad he’s recovered now.

3. [+52][-4] Lee Minhyuk used to go to the gym everyday to work out,,, He cared a lot about his health, but looking at how much weight he lost in just 14 days, I could feel from my skin that we’re still far from getting away from COVID. Anyway, I’m thankful that he recovered so quickly…..

4. [+29][-0] Wow but he looks really pale and sick… If someone who exercises turned that way, what would happen to me who eats mala and lies down and eats fried chicken and lies down again on a daily basis;;;

5. [+20][-1] There are many people who are saying that the mortality rate for COVID is really low, why are people afraid, we’re not gonna die even if we catch COVID anyway so there’s no need to be afraid, things like that. I really don’t wanna see these ignorant people. Because of this nonsense, there’s been more and more of these bastards who are always not wearing a mask when they’re outside, I just wanna kill these people… Yea the mortality rate is not high, but that’s it. You suffer a lot until you recover, and even after you recover, you could be left with long-term after effects for the rest of your life. I really wanna beat the heck out of the people who do not consider this at all and funnily think of COVID as a normal cold;

7. [+13][-0] (Although he’s a rapper) he went to attend his vocal lesson right away, and the first thing he did after being discharged from the hospital was go on Instagram live before his discharge was officially announced by the agency or on the news. He still has a cough and he lost a lot of weight, but even though he suffered a lot he still came to his fans immediately to let them know he’s alright and to tell his fans to stay healthy. I felt upset because of all of this, and I’m so touched it makes me want to cry.. Let’s really stay healthy from now on.

11. [+5][-1] Thank you to other fans and non-fans for your nice words ㅠㅠ Everyone please stay healthy ❤️ He caught COVID 2 weeks ago when he was attending his vocal lesson. Although he’s back and strong now, but because he had symptoms, he lost a lot of weight and still has a cough, my heart ached when I saw him like that.. MELODYs, stay healthy❤️

Sharing Funny GIFs And Pics Of Your Biases