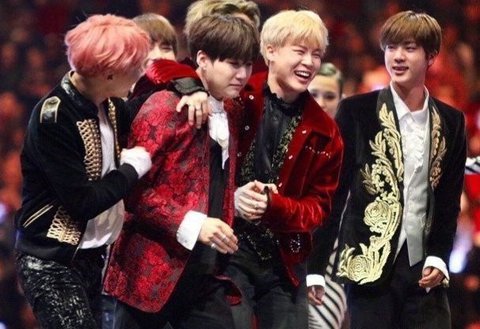 This is my first post and I’m kinda nervous;;

Wow I used to have 0 interest in celebrities,

To me, celebs meant nothing else but Lee Chungyong, Suwon Samsung Bluewings,

during the wedding ceremony of an unnie I’m close to…

There are always so many posts on Talkers’ Choice dissing BTS

and I was wondering why these people are like this

I’ve been going around these few days collecting GIFs of him, why is he so cute…

I included this because it’s fxxking cute.

I was looking around on YouTube and I listened to his mixtape? as well.

He’s definitely that style, but why is he so cute at the same time… insane…

1. [+175][-6] I was also a soccer fan who only watches Tottenham soccer matches, but after I heard about him using kkwaenggwari (folk music instrument) in ‘Daechwita’ on the news, I looked up the song and became his fan haha After watching ‘Run BTS’ I fell for BTS too.. I almost died laughing after watching them play water polo when they went on an outing ha

3. [+150][-5] But seriously, the diss posts are useless kekeke When you see people dissing BTS and you look them up, you’ll realise they didn’t do anything wrong and it’s just people with inferiority complex dissing them kekeke If you fall for Min Yoongi there’s now way out……

6. [+48][-0] Same, I was wondering what have BTS done, how bad are they, why are people dissing them like that. After I looked them up, he caught my eye and I thought ‘he’s so fxxking cool’. Then YouTube’s algorithm recommended a compilation of reactions to Hobi debating over mint chocolate. I wondered what it was about so I watched it and I teared up because it was too funny kekeke I wanted to know who they are so I started watching ‘Run BTS’, I joined Weverse, I bought their albums and I even watched every episode of ‘In The SOOP’.. Seems like it’s too late to leave the fandom..

9. [+26][-0] That’s the same reason why I started stanning him in 2015 keke There were too many diss posts so I was wondering what’s going on and after I found out about them… Other fandoms are dissing BTS with zero guilt when they would feel so heartbroken if their favs were suffering from the same thing they’re doing to BTS. I was really fxxking shook. At that time, not a single person was stopping the hate and I felt bad for them so I became a fan… Thanks to COVID, I’m taking a break from fangirling now, but rap-line is my love. Please love our Suga a lot…

10. [+25][-0] I became a fan because of diss posts. If it’s really bad, and you try to shield them telling people to stop, you’ll really become a fan after watching their videos ㅠㅠ…..

Why is BTS’s American Fandom So Powerful?