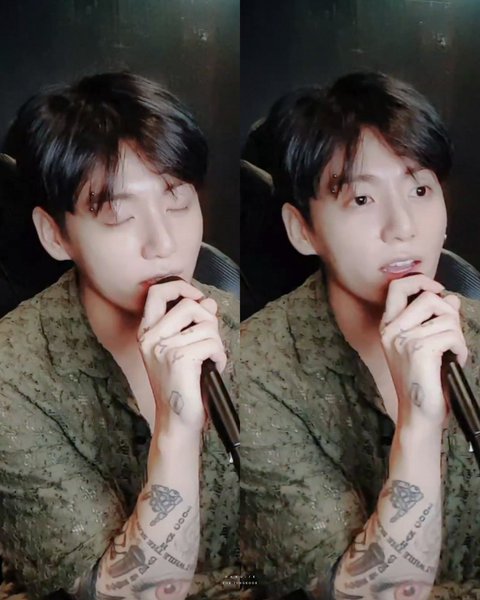 The title for today’s V LIVE is ‘Jungkookie’

At first, Jungkookie started by grabbing onto a mic!

And he sang many sweet pop songs for us.

Especially in Ra. D’s ‘As Always’, the part where he included ARMY in the lyrics ‘ARMYs be happy as always’ was so goodㅠㅠㅠ

As always, he started attacking us with his bareface visuals all of a sudden… He planned to make ARMYs cry today. Jungkookie must be aging backwards.

And then at midnight 12 a.m. his excitement level suddenly rose and he started doing a room corner concert kekekekeke ‘Euphoria’ -> ‘Idol’ -> ‘Baepsae’ -> ‘Wings’ -> ‘So What’, the set list was insane.

Where can you find an idol who dances and sings for you till 1 a.m. while sweating so hard?!

He ended the room corner concert 20 mins after the original decided time because he got too excited with the fans.

In the end, there were 10m viewers in today’s V LIVE kekekekekeke Where did my concert ticket go ㅠㅠㅠ (After V LIVE changed their policy, viewer count cannot be repeated!)

The scale was insane. Today was an all-time-legend, seriously!!! It was so nice to see Jungkook’s happy face during the concert.

10. [+104][-0] He didn’t know what to do so he just,, said he’s gonna sing for us. He knows what K-ARMYs want more than the agency does. He wasn’t gonna sing ‘Peaches’ because of the lyrics but because the fans wanted to hear, he sang for them at last ㅠㅠ He was like ‘what should I do!!’ and he suddenly did a room corner concert for us!! He danced while singing ‘Euphoria’ ㅠㅠ ㅠ He was doing a title track medley, and he sang and danced to every song very carefully. Thanks to YouTube Premium, he moved on to ‘So What’ immediately for the last song! He said there’s no way he can not do it. He said he’s gonna leave, but he said goodbye for 7 times ㅠㅠ How can you not love him. But he was so so skinny, but because he looks so fxxking handsome when he’s skinny, I can’t tell him to eat more.