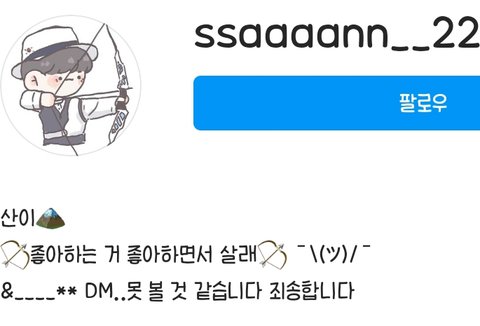 I don’t think I’ll be reading my DMs, sorry.

She said she won’t be reading her DMs, and she’s sorry.

These crazy people are really…

2. [+723][-9] Korean men are fxxking ridiculous. They are protesting to the archery association and telling her to return her gold medal, do they think the association is gonna care?

4. [+319][-0] Please go to a law firm and sue them kekeke Show them what life is, crazy bastards. Oh-jo-oh-uk is a meme from so long ago, and they’re suddenly saying it’s a bad word used to hate on Korean men, getting aggros to attack someone who’s won 2 gold medals for the country kekeke These pussies are bullshitting because people are listening to them, but we should ignore them. Does anyone not know that this controversy’s made up? They are getting mocked by people from overseas and they feel embarrassed that’s why they’re attacking the athlete now.

5. [+236][-0] kekekeke Making protest calls to get the association to cancel her gold medal, are they crazy, seriously? If she really ends up making an apology for this and her gold medal really gets taken away, then she’s really dead globally. Foreign countries are more sensitive to feminism. They’re gonna think, “She was being scolded for being from a women’s university and cutting her hair short, and now she has to apologise and have her medal taken away? Wow human rights in Korea though, now Korean men are being humiliated by the public”. Is it even appropriate to cancel her medal in the first place? Do something productive, is that the only thing you can do aside from eating?

6. [+188][-0] Never knew there’s this kind of country betrayal kekeke. Attacking the mentality of a country representative athlete who has upcoming events, these Korean men.

7. [+182][-0] But it’s understandable because these Korean men are soooo fxking jealous of An San. Visuals that can lure girls’ hearts + born to be #1. 2 Olympic gold medals +in one day, earned the same amount that Korean men will have to work 100 years for + representing the country.

8. [+141][-0] If you try to imagine it, it’s fxxking funny kekekekekekeke After they make the call: Ah. Um… Athlete An San.. She hates men because she cut her hair short and she said words like oh-jo-oh-uk in the past??!; (shaking) Please cancel her gold medal (koomcheok – chewing sound by fat people).